Up until about 2 years ago, I’d never been to a professional baseball game before. The first ball field I experienced was Turner Field in Atlanta, GA. (My boyfriend is a diehard Cardinals fan so I surprised him with series tickets to watch the Braves and Cardinals.) Just shy of a year after experiencing Turner Field, I finally got to experience Busch Stadium; both of these fields are open-air fields. While I was in Houston, my boyfriend and our roommate decided that they were going to drive up to Saint Louis and watch the Blues take on the Predators in Round 2 of the Stanley Cup. So I decided that I would go to a Houston Astros game without him – to make things better, he hasn’t been to this field yet.

While Minute Maid has a retractable roof, it was the first indoor field I experienced because the roof was closed due to rain. It’s certainly a different experience with a closed roof. I like getting to games early so I can walk around and take in the atmosphere (and get any giveaways!). There weren’t any giveaways the night I went, but it was Dollar Dog night! I got to the field just as the gates were opening. I always like to start my exploration with a view from behind home plate. The beauty of getting to the field so early is that the ushers don’t care if you want to go down and see the field up close; most of them will take your picture for you. 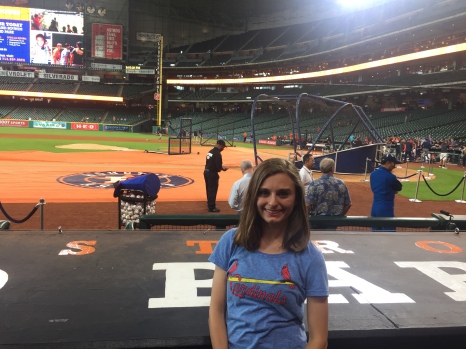 Now even though Minute Maid has escalators for the high levels, there’s really only stuff to do on the main floor. On the other floors there are concessions and a team store, but no fun things to look at or interact with. On the main floor, there’s obviously a lot of concession stands and several team stores. They also have a wall where you can compare your skills against their players and there’s a small kid area.

Here’s some of the things I encountered on my exploration:

The field itself is pretty interesting too, they have a wall of turf with their logo extruded from it and their home bull pen is underneath part of the first level and is enclosed, whereas the visitor’s bullpen is more standard being open on the top.

You know how people always say, “There’s not a bad seat in the house,” but in some cases there are? Well in this case, I finally agree. There really doesn’t seem to be a bad seat in the house. Our seats were in the Third Level and the view was great! I didn’t feel like I was up in a nose bleed seat or that I was sitting on top of the people in front of me.

Every stadium has something unique to it; of the three ball fields I’ve been to, this is the first one to have a train that runs when there’s a home run!

I wish it wouldn’t have been raining because the park is on the outskirts of downtown Houston and it would have been really cool to watch an Astros win with the Houston skyline over the outfield.